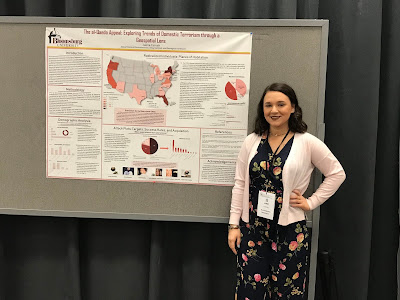 Jaime Yarosh, a senior environmental, geographical, and geological sciences (EGGS) major, presented her research on geospatial trends of al-Qaeda extremists living in the United States at the American Association of Geographers Annual Meeting this spring in Washington, D.C.

Yarosh’s research analyzed a variety of geographic, demographic, and influential characteristics of United States-born citizens who are affiliated with and/orinspired by al-Qaeda. She found men and women of all ages from multiple states across the country, studied where they were living, if they planned or carried out attacks, who or what was targeted, and looked for states with high numbers of individuals dedicated to the cause.

Yarosh’s interest in the complexity of terrorism studies began after taking a course titled “Geography of Terrorism.” In the class, she was required to read the book “The Looming Tower,” which essentially provided a historical context on how al-Qaeda became one of the most powerful militant Islamist organizations in the world and eventually carried out the devastating 9/11 terrorist attacks.

Following the attacks, stereotypes characterized the “typical” terrorist by factors such as religion, geographic location, sex, and more. Yarosh was intrigued by al-Qaeda’s ability to appeal to almost anyone, regardless of the aforementioned variables and wanted to explore this data from a geospatial perspective. She decided to meet with the professor of the course, Jennifer Haney, Ph.D., who became her mentor throughout the process.

The American Association of Geographers Annual Meeting is one of the nation’s largest conferences for geographers, GIS specialists, environmental specialists, and other leaders in research and applications in geography, sustainability, and GIS science. Yarosh presented her research to approximately 9,000 attendees.