“The ASBMB has routinely validated what we have always known,” said Michael Borland, ASBMB Accreditation Coordinator and professor of chemistry and biochemistry. “Small class sizes, hands-on laboratory experiences, use of cutting-edge instrumentation/methods, and the high impact practice of one-on-one faculty-mentored research experiences creates students ready for nationwide success in whatever path they choose.”

BU was also the first PASSHE program to garner ASBMB program accreditation in 2014. Only 85 programs nationwide hold ASBMB accreditation, including 5 others in Pennsylvania alongside BU. “It is a great testament to the hard and dedication of our students for BU to regularly earn national recognition alongside other prestigious ASBMB programs; I am proud that BU, and our department, provides this opportunity to our students,” said Borland.

Stone, a senior from Dresher, plans to attend medical school with the goal of becoming a cardiovascular surgeon. Jason has conducted research with Matthew Polinski, associate professor of chemistry and biochemistry, investigating the understudied chemical bonding patterns in f-element containing materials. Stone’s work studying these uncommon ligands and donors will shed light on new modes in which f-element chemistry can be harnessed.

“All the professors have been very supportive and encouraging,” said Stone. “Due to the small student to teacher ratio you really get the chance to interact with your professors and get to know them. Several of my professors were constantly available to help me work on my medical school application and provide valuable insight into the processes and how I could make myself stand out. For me personally, research has taught me several valuable lessons about science and about life, but most importantly it has taught me how believe in myself and work towards my goals.”

Tara Full, a senior honors student from Mountain Top, will graduate this fall and plans to attend medical school to become an emergency medicine physician. Full conducted her two-semester honors research project with Kate Beishline, assistant professor of biology, to study the regulation and role of telomere dynamics in aging and cancer. Full’s research was also supported by a chemistry and biochemistry Department Summer Undergraduate Research Experience.

“The chemistry program at Bloomsburg has taught me more about myself in four years than I ever thought possible,” said Full. “It has taught me to reach outside my comfort zone and shown me that my potential in this field is much larger than what I originally thought as a freshman. I would like to specifically thank Dr. (Michael) Borland and Dr. (Matthew) Polinski for encouraging me to pursue my dreams and change those dream into a very real possibility for my future.”

Stepan Budkin, a Hazleton resident who was born in Russia, praised the access to laboratory experiences at BU. “The BU chemistry program is focused on giving students lots of laboratory experience, which becomes very important when students are searching for jobs and graduate schools,” said Budkin. “Students spend over four hours a week in a lab when they are taking multiple chemistry classes. Labs meant for more advanced classes are stuffed with unique equipment.”

Budkin conducted research with Dan McCurry, assistant professor of chemistry and biochemistry, in generating high surface area electrodes for sensitive molecular analysis. He has been able to alter fabrication conditions to modify geometry on the hundreds of atoms scale. Budkin plans to attend graduate school in the biomedical sciences as a mechanism to apply his knowledge to solving real-world science diagnostic issues.

Email ThisBlogThis!Share to TwitterShare to FacebookShare to Pinterest
Labels: Chemistry and Biochemistry 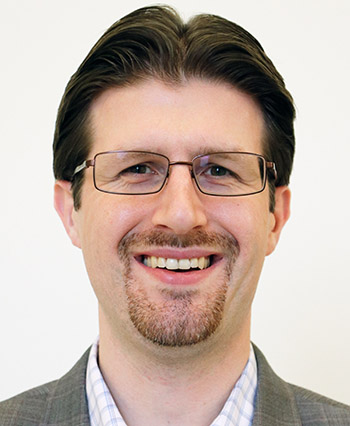 Adrian Van Rythoven, assistant professor of environmental, geographical, and geological sciences, has his article, “Ultramafic xenoliths from the 1.15 Ga Certac kimberlite, eastern Superior Craton, [bloomu.us5.list-manage.com]” published in the The Canadian Mineralogist (2020) 58 (2): 267-286. Co-authors are Daniel Schulze and Donald Davis. Kimberlite is a type of volcanic rock originating from depths of more than 100 miles within the Earth. It is best known for bringing up crystals of diamond, but also contains useful, otherwise inaccessible, samples of other types mantle rock (xenoliths). Examining these xenoliths allows for us to learn about deep Earth processes. Age-dating the kimberlite allows us to construct the history of those processes that have built the Earth over time.

Posted by Bloomsburg University COST at 6:35 PM No comments: 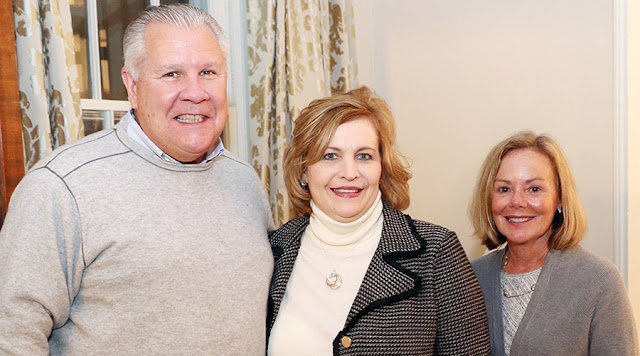 Bloomsburg University of Pennsylvania nursing department faculty member Kimberly Ann Olszewski has been named a 2020 Fellow by the American Academy of Nursing (Academy).

Olszewski is one of 230 distinguished nurse leaders from around the globe, and one of just 10 individuals from Pennsylvania, to join the 2020 class. The inductees will be recognized for their significant contributions to health and health care at the Academy’s annual Transforming Health, Driving Policy Conference, taking place virtually Oct. 29-31.

An associate professor of nursing, Olszewski holds the Breiner Family Endowed Professorship for Nursing at BU, a five-year presidential appointment she received in 2018. She serves as graduate program coordinator, and the nurse practitioner and doctorate in nursing practice program director.

In 2007, she received Fellowship distinction from the AAOHN. Olszewski also serves on the AAOHN board of directors as president-elect and previously served as president of the Northeast Association of Occupational Health Nurses and the Pennsylvania Association of Occupational Health Nurses. She has presented at the local, state, regional and national levels of the association over the past 10 years on numerous topics, including DOT certification, marketing OHNs, fatigue management, healthy people 2020, social media integration, and diagnostic updates.

The Academy is currently comprised of more than 2,700 nursing leaders who are experts in policy, research, administration, practice, and academia who champion health and wellness, locally and globally.

Through a competitive, rigorous application process, a committee of elected Fellows review hundreds of applications and select new Fellows based on their contributions to advance the public’s health. Induction into the Academy is a significant milestone in a nurse leader’s career in which their accomplishments are honored by their colleagues within the profession. The newest Fellows represent 39 states, the District of Columbia, the U.S. territory of Guam, as well as 13 countries.

Posted by Bloomsburg University COST at 9:30 AM No comments: 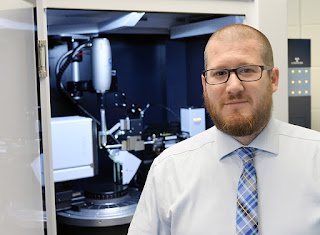 Matthew Polinski, Associate Professor of Chemistry and Biochemistry, had a recent publication (published June 23, 2020) in the American Chemical Society journal Inorganic Chemistry which features three chemistry and biochemistry alumni as co-authors (Kristi Brittain ’17, Todd Poe ’18, and Natasha Brenner ’20) and collaborators from Creighton and Florida State University. The paper is titled "Trivalent f-Element Squarates, Squarate-Oxalates, and Cationic Materials, and the Determination of the Nine-Coordinate Ionic Radius of Cf(III)."  In this work, they prepared new materials containing the radioactive elements, Americium and Californium, the latter of which is the last element on the Periodic Table for which bulk/large scale chemistry can be performed. They were also able to calculate, for the first time ever, the ionic radius of Cf(III) in a nine-coordinate environment. This publication was made possible by our recent acquisition of the Bruker D8 Quest single crystal x-ray diffractometer.

Posted by Bloomsburg University COST at 6:18 AM No comments: 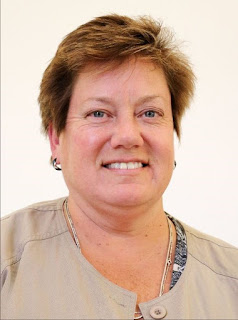 Pamela Smith, Professor of Communication Sciences and Disorders, has been recognized as a 2020 recipient of  Fellowship of the American Speech-Language-Hearing Association. Smith has distinguished herself as an outstanding member of the speech pathology profession and was nominated in the areas of Clinical Education and Academic Teaching, Service to ASHA, and Service to and Leadership Positions in State Speech-Language-Hearing Associations and/or Other Related Local, Regional, National or International Professional Organizations (not ASHA).

The status of Fellow is retained for life and is one of the highest honors this professional organization can bestow. It recognizes professional or scientific achievement and is given to a member who has shown outstanding contribution to the professions-contributions that are significant and would be so regarded within and beyond one's community or state.

Retrieved from the Week Ahead 7/20/2020
Posted by Bloomsburg University COST at 5:29 AM No comments:

The Bloomsburg University of Pennsylvania chapter of Beta Beta Beta (Tri-Beta), the national biological honor society, was awarded the Lloyd M. Bertholf Award as the nation's Outstanding Chapter for the 2018-19 academic year. The group is advised by faculty members Abby Hare-Harris and Cynthia Surmacz.

Beta Beta Beta is a national honor society established in 1922 with over 430 chapters across the United States. The mission of Tri-Beta is to stimulate scholarship, disseminate scientific knowledge, and promote biological research.

The Bertholf Committee bases the award upon four criteria: member activity in conducting and publishing research, participation in district and national conventions and other scientific meetings, chapter programming and activities, and orderly record-keeping and communication with the national office. Only activities of the preceding year are considered. The application considers the number of members in each chapter thus allowing both large and small chapters to win the award. The BU chapter has more than 60 student members and 14 faculty members.
Activities of BU's chapter included hosting a regional scientific conference for area colleges and universities, holding mock interviews for students applying to graduate and professional schools, and giving a reception for graduating seniors. Chapter members also supplied coffee and donuts during finals week, provided weekly tutoring sessions for students in introductory biology courses, donated to both a national and local research scholarship, and sponsored a BU student to attend a national scientific conference. It also held activities for residents at a nursing home, held biology trivia contests, helped Girls Scouts earn science badges, and provided biology-related activities for children at BU's Sibling and Children's Weekend.


retrieved from The Week Ahead 7/6/2020
Posted by Bloomsburg University COST at 6:03 AM No comments:

A love of the sea...and students 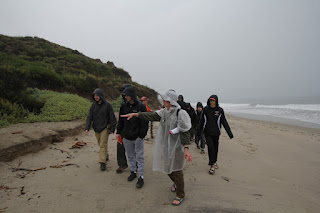 Posted by Bloomsburg University COST at 8:20 AM No comments: