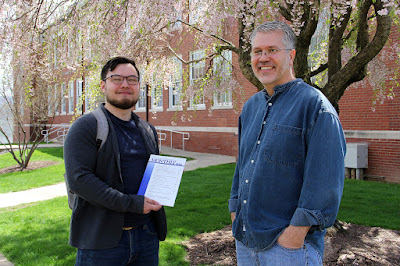 James Sharpe, a senior mathematics major at Bloomsburg University, and Chris Lynd, an associate professor of mathematics, recently had their research published in the latest edition of The American Mathematical Monthly.

This is the most widely read math journal in the world, according to Lynd.

Their paper is titled, “Sequences Generated by Powers of the kth-order Fibonacci Recurrence Relation.” Lynd said James used his computer programming skills to perform computer simulations of sequences generated by Fibonacci recurrence relations. Modifying the computer program allowed him to experiment with Fibonacci recurrence relations of higher order and allowed him to experiment with different exponents in the equation, Lynd added.

According to Lynd, James was able to discover several mathematical patterns and unify these patterns into a single formula. This formula was a conjecture that needed to be proven in order for it to become a mathematical theorem. Using knowledge from Lynd’s background in dynamical systems, the two were able to prove the conjecture resulting in a general theorem which provides the limit of any positive sequence that’s generated by a pth power of a kth-order Fibonacci recurrence relation.

Lynd presented their research at the 2018 national mathematics conference of the American Mathematical Society.

~https://bloomsburgu.tumblr.com
Posted by Bloomsburg University COST at 5:36 AM