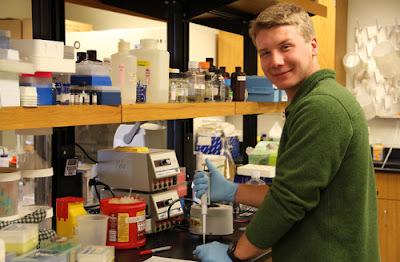 When Andrew Cross walked into his interview at The Edward Via College of Osteopathic Medicine in Virginia, the interviewer told Cross he had never heard of Bloomsburg University. By the end, the interviewer not only knew BU but discovered it had produced the applicant with the highest Medical College Admission Test (MCAT) score.

Cross knew before applying to medical schools, he would benefit from having research experience. With help from biology professors Cynthia Surmacz and John Hranitz, he landed on the topic: “Assessing Oxidative Stress in Honey Bees (Apis mellifera) after exposure to Neonicotinoid Insecticides.” Cross set his sights on studying how pesticides might affect honey bees and if it could be linked to Colony Collapse Disorder. “I’ve always been interested in environmental impacts,” said Cross, who grew up near Bloomsburg in the small, rural town of Benton and spends much of his free time outdoors. “Bees have a huge impact on everything we do, and I thought this topic was worth researching.”

Since he was a child, Cross has had a passion for nature. His enthusiasm for hunting and fishing manifested itself in a curiosity about biology, which ultimately led to studying it in college. And it’s paid huge dividends. Cross, who was recently named College of Science and Technology’s top honor grad, not only got into medical school early he had his choice of four schools. “When I go fishing I have to account for many variables, such as water temperature, depth, clarity, time of day and year, and what the fish might be feeding on,” said Cross, adding detailed observations about things such as environment and other variables are not unlike his tasks as a doctor when choosing the best treatment options for his future patients. Cross received both research grants he applied for. One from Beta Beta Beta, a national biological honor society, the other from Commonwealth of Pennsylvania University Biologists. These grants fully funded his research and allowed him to purchase the necessary equipment — such as Catalase and Glutathione S-transferase assay kits, binding plates and reservoirs — to study oxidative stress in honey bees.

His research experience, along with his exceptional grades and high MCAT score, led Cross to be accepted into four medical schools months before his colleagues. “Some don’t get accepted until as late as March,” said Cross. “I received my acceptances at the end of October.” The road to being accepted into medical school was certainly not an easy one. Cross had to learn to balance his schoolwork and research while employed part-time, and still making time for his hobbies. “I try to put schoolwork first, but also make sure I take time to enjoy my hobbies when I feel myself getting overwhelmed,” said Cross, who often studies in his tree stand while hunting in the fall. “It’s a nice quiet place where I can focus on the material.”

Being in the medical field is a profession dependent on patience, according to Cross. His time as an outdoorsman has given him a type of patience that’s hard to come by. “The reason people call medicine a ‘practice’ is because not everything will go right,” said Cross. “It’s important I remain patient and am able to adapt when things do go wrong.” Cross said his classes at BU prepared him well for everything that will come after his graduation. Cross added he learned more from his research experience than he ever could in a classroom. “You can read all the research papers you want,” Cross said. “But until you do it yourself, you’ll never understand the work that goes into research.” 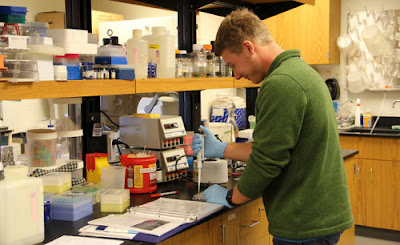 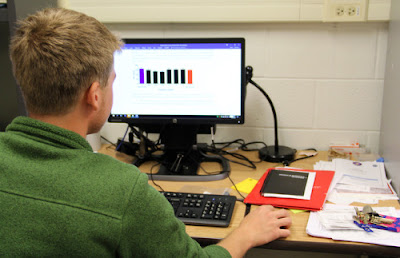 Posted by Bloomsburg University COST at 9:19 AM