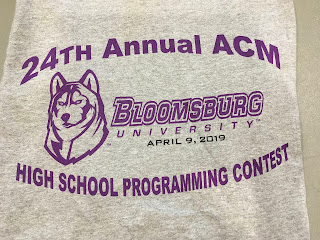 60 teams from 20 high schools competed in BU's 24th Annual ACM High School Programming Contest on April 9, 2019. This contest is coordinated by Dr. Drue Coles, professor of Mathematical and Digital Sciences, and supported by the MADS department, with prize donations made by Solution and Develpment Firm LLC. The contest consists of ten computer programming problems ranging from elementary to difficult. The teams are composed of up to four students and two computers. Each team can use the programming language of their choice to solve the problems.  The winner is determined by the highest number of problems solved, with ties broken by time of completion for the last correct solution. This year, the first place was Team 1 from State College with 10 problems solved. Second place was #Hornets from Emmaus with 7 problems solved. Third place was HexaHornets from Emmaus with 7 problems solved. All results from the competition can be found here.  Interested in computer programming?  Try your skill on the 2019 Problem set.

Posted by Bloomsburg University COST at 7:58 AM