Five students from the BU Health Physics program who received training from the Susquehanna Nuclear Plant last spring participated in Columbia Country Emergency Management Drill. The organizers commented that the students did a tremendous job and conducted themselves in a professional manner. The students were invited back by the Deputy Director EMA of Columbia Country to join in the Federally evaluated drill held every four years for the plant and which is scheduled for October 2016. The students who participated were: Mike Algeo, Josh Dendler, Harrison Ludewig, Pat Mattera, and Zach Romano.

Corey Dubil and Joshua Dendler presented their research investigating the indoor radon levels in Bloomsburg University campus buildings at the 61st annual Health Physics Society meeting in Spokane, WA from July 17-21, 2016.  They conducted their research with fellow undergraduates Andrew Stacy and Shana Cuff and Health Physics faculty members, Dr. David Simpson and Dr. Naz Afarin Fallahian. The abstract of this work was published in the Health Physics Journal in July 2016. It should be noted that Joshua Dendler, a recipient of Dr. Kozloff Student Fellowship Award, has been selected as one of 12 students nationwide to serve as a Student Support Committee member of the Health Physics Society.

Austin Olson, an honor student who recently graduated from Bloomsburg Health Physics program, also presented his research at this meeting. The abstract of his project entitled: Survey of Policies and Practices for the Inspection of Lead Aprons at Medical Facilities was published in July edition of the Health Physics Journal. This research was performed in collaboration with Penn State Hershey Medical Center, and under the supervision of Dr. David Simpson from Bloomsburg University and Steve King from Hershey Medical Center. 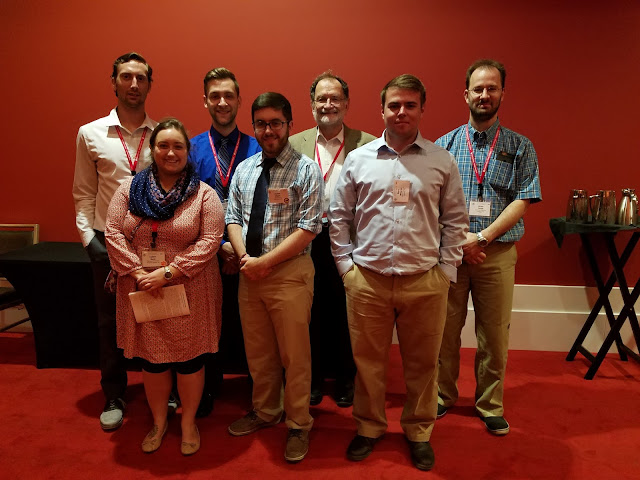 Harrison Ludewig, a senior Health Physics student who had a summer internship at Hershey Medical Center, received a $1,500 grant from the American Nuclear Society as well. He intends to participate in a research project at Geisinger Medical center during his last year in Bloomsburg and would like to pursue his Master's degree in Medical Physics.


Posted by Bloomsburg University COST at 10:39 AM