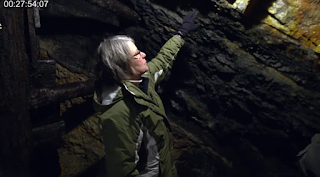 Dr. Venn can be seen starting at the 27:30 time mark speaking about the Centralia coal fire.  She journeys into the Ashland Pioneer Tunnel to talk about the densely packed seams of coal and explain how the fire can spread sequentially through the veins of coal.  Dr. Venn then talks about the vent pipes, installed around 1981 that were used to take noxious gases away from the town of Centralia.  She then explains how attempts to install non-combustible barriers to keep the fire from spreading were unsuccessful.
Posted by Bloomsburg University COST at 6:11 AM