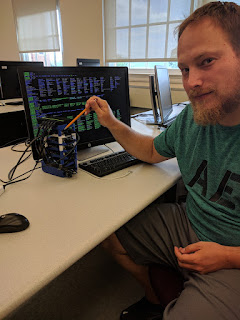 Picking college courses most often depends upon what’s being offered, but one computer science student recently had the opportunity to help his own cause and create one.

Brett Treas, a freshman computer science and digital forensics dual major, spent the summer researching and constructing a project involving distributed computing — a field of computer science that involves the connection of computers into networks.

“The project consisted of networking four Raspberry Pi computers into a ‘Beowulf Cluster,’” Treas said. “This cluster provides a cheap solution for someone to explore the benefits of distributed computing and parallel processing.”

According to Treas, the idea was presented to computer science students via email by professor Robert Montante, who was looking to create a prototype to be potentially used for a new class in the major.

Posted by Bloomsburg University COST at 7:15 AM