Research at most institutions of higher learning has always been a way of life to one degree or another. While some colleges and universities have been labeled as “teaching institutions” and are often differentiated from “research institutions,” research is definitely an integral part of college and university life, regardless of what the institution’s major emphasis may be.
Let’s look at it this way: Theory and pedagogy in many disciplines each create a sturdy foundation for future inquiry and exploration; and yet both were more often than not, end products of the research process itself. Perhaps this cyclical phenomenon undergirds the importance of research as an ongoing human endeavor, both at institutions of higher learning and in societies as a whole.
Specifically, research activities have always played an important role here at Bloomsburg University. As an example, emphasis upon research has been at the heart of the College of Science and Technology since its inception in the early years of the new millennium. Even earlier on in the late 80’s, BU chemistry students often gave research presentations on the last day of each semester. Shortly after the birth of COST, Dean Robert Marande helped to formalize the presentation process by thinking that it would be beneficial for all student researchers in the College to have the opportunity to present their research findings before a wider audience beyond the confines of their classrooms. Consequently, the College of Science and Technology’s Research Day was born.
This year’s Research Day began with an excellent keynote address by Dr. Jennifer Whisner an Associate Professor in the EGGS Department, who offered an interesting overview of the trials, tribulations, joys, and frustrations of the undergraduate research process. Following Dr. Whisner’s talk,  there was a brief break which set the stage for the Poster Session. It must be said that each of the posters exhibited a high quality of professionalism and visual appeal. It appeared as though  the judges had their work cut out for them, given the quality of the posters.
All posters were judged based upon their coverage of the topic, use of graphics, quality of layout and design, accessibility/readability of the text, well documented sources, and the quality of the creator’s oral presentation. The three posters that won the first, second, and third places respectively in the competition were Lauren Chamberlin (“Investigating the Presences of Synapsin III in Human Sperm”), Shana Wagner (“The Effect of Peroxisome Proliferator- Activated Receptors on Estrogen Receptors in Malignant Melanoma”), and Ryan Sullivan (Analyzing Local and Regional Groundwater Flow using ArcGIS within Columbia County, PA”). Honorable Mentions were awarded to Haley Kravitz, Madison Aungst, Kirk Jeffreys, Mark R. Drumm, Elliott Fackler, Morgan Ruziecki, Daniel F. McGann and Luke A. Long Jr.
All in all, Research Day offered an impressive panoply of work on the part of all BU Science and Technology students. Inquiring minds here at Bloomsburg University are indeed alive and well and in some cases, may hold the keys which will unlock the doors to discoveries that may well improve the quality of life here on earth in the not-too-distant future.


Kudos to all who participated in this important yearly event, as well as to all who worked behind the scenes to make it successful!
- Michael Stephans 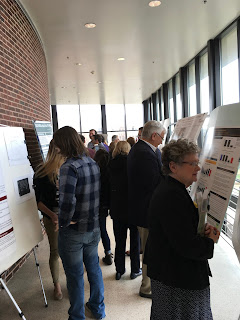 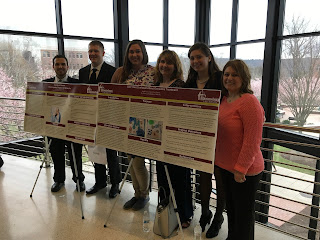