In 2001, Bloomsburg University mathematics professors Kevin Ferland and Bill Calhoun wrote “The Pi Song.” This parody of the classic rock 'n' roll song, “867-5309/Jenny” by Tommy Tutone,” changes the numerical chorus to “3.14159” and transforms the whole song into a lesson about the mathematical constant, pi. For several years after that, under the band name, The Derivatives, Ferland, Calhoun, and computer science professor Erik Wynters performed “The Pi Song.” This attracted the attention of middle school and high school mathematics teachers across the country, who like to celebrate Pi Day in their classrooms each March 14th by using “The Pi Song.” 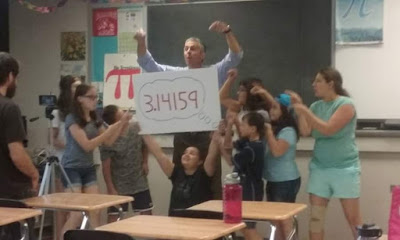 In the summer of 2016, Ferland was inspired to produce a professional recording and video of “The Pi Song” for all to enjoy; so he hooked up with a talented local musician and audio engineer, Steve Gilliland, who then performed and recorded the song. Next, working with a cast of kids from a summer theater camp in Bloomsburg, they filmed
“The Pi Song Video,”
which can now be seen on YouTube at https://www.youtube.com/watch?v=XLK89OXaxz8&feature=youtu.be. Once you watch and listen to the song, you will never forget the number pi. 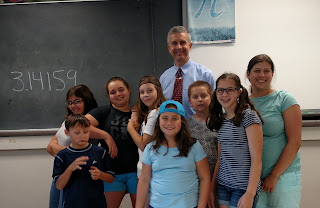 Posted by Bloomsburg University COST at 11:33 AM