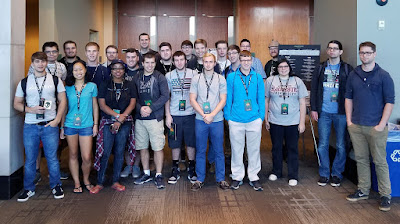 This October students from the Bloomsburg Digital Forensic Club attended the GrrCON computer security conference in Grand Rapids, Michigan for the third consecutive year. Student participation was up this year with 34 students and one alum joining Phil Polstra, associate professor of digital forensics. The first and second year the club participated in this event 22 and 30 students attended. This was Dr. Polstra’s fifth consecutive year as a speaker at this event.

GrrCON is held in Grand Rapids, Michigan each fall and attracts speakers from around the world. It features numerous speaking tracks, workshops, villages, and competitions. This year some new villages appeared including an open hacking village, car hacking village, and Internet of Things (IoT) hacking village. As in years past, BU students spent many hours in these villages learning about new areas in security and forensics. Some of the students brought that knowledge back and shared it with rest of the club by performing a car hacking demonstration. They were able to do this thanks to having won some of the required hardware as a prize in the largest competition at GrrCON. 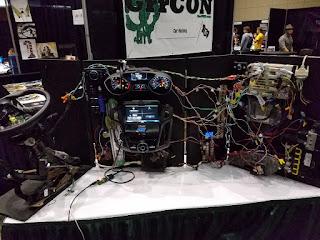 The most popular contest at GrrCON this year, by a large margin, was the Open Source INTelligence (OSINT) Capture the Flag (CTF) competition. Seventy six teams competed for thousands of dollars in prizes in this competition which was introduced last year. One of the BU teams ended up in third place when the dust settled on the final day of the conference. At one point this team was only a few points behind the first place team and over a thousand points ahead of the next team below them. Students competed in this competition last year placing second out of forty four teams. BU students have competed and placed in competitions all three years they have attended GrrCON.

In addition to all of the learning occurring in villages, talks, workshops, and competitions, there was a lot of networking going on. Approximately fifty organizations sponsored GrrCON and our students took full advantage of the chance to speak with many of these sponsors about internships and full time jobs for those close to graduation.
Posted by E.G. Foster at 7:42 AM