Student Nurses Association Gives Back to People In Need 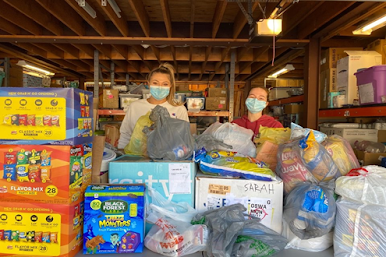 Bloomsburg University’s Student Nurses Association (SNA) teamed up to help the Ronald McDonald House in Danville and the BU Women’s Resource Center during these hard times. Jordyn Blucher and Sarah Kelly, both senior nursing majors and members of SNA, were eager to participate in these service activities this semester.

“SNA is an organization that is directly for nursing students, where all nursing students have the opportunity to join,” said Blucher. “We meet once a month and talk about what happenings in the nursing program. We also offer community service events and inform nursing students on ways that they can get involved.”

Blucher and Kelly talked about the items they collected.

“The Ronald McDonald House is an organization that provides housing and food at a low expense for families whose children are patients at the Janet Weis Children’s Hospital. Every year, we usually go there and volunteer in the kitchen, but because of COVID we were not able to do that. Instead, we did a drive where we collected canned food, plates, napkins, and utensils to give to the families,” explained Kelly.

While organizing the drive for the Ronald McDonald House, they were also organizing another drive with the Women’s Resource Center.

“The Women’s Center, a non-profit organization on campus, provides free support services to survivors of domestic violence and sexual assault. We put together 16 boxes of donated items, which consisted of razors, toothbrushes, deodorant, food, cleaning supplies, and women’s hygiene products. We have donated to the Women’s Resource Center in the past, and we love working with them,” said Blucher.

The meaning of giving back is very important to both Blucher and Kelly.

“Seeing the look on their faces and hearing how thankful they were gave me a great feeling inside,” exclaimed Blucher.

“Giving back as a nurse means that you get to see the more vulnerable side of people and see that emphasizes how important it truly is,” said Kelly.

SNA is something that both seniors Blucher and Kelly recommend to young and current nursing majors.

“SNA is a great way to get involved with people in the major. As a freshman, it is hard to adjust. But after I joined SNA, I met people who were going through the same experiences as me. I connected with older students in the major, who mentored me and helped me learn more. It gave me a sense of a community.” said Blucher.

After Blucher and Kelly graduate, they both plan to work as full-time nurses.

Posted by Bloomsburg University COST at 6:12 AM