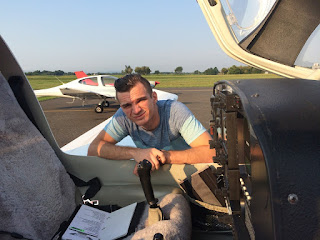 For almost as long as he can remember, Adam J. Campbell knew he wanted to fly. As he got older, he realized that the job he coveted with a major airline would require a bachelor’s degree as well as time in the cockpit. After earning his Professional Pilot associate degree from Lehigh Carbon Community College in 2015, Campbell started looking for a bachelor’s program. That’s when he learned about Bloomsburg University’s Bachelor of Applied Science in Technical Leadership (BASTL) degree. In addition to accepting all his LCCC credits, the flexible program would allow him to continue amassing flight hours and to work part time at Wegmans Food Markets warehouse as a product selector, where he ensures that the correct orders are loaded on trucks headed to stores.

“I look at the BASTL program as beneficial, both in case I ever pursue a career outside aviation as well as giving me management skills that will help me if I become (an airline) captain at some point,’’ said Campbell, who earned his BASTL degree in December 2017. “As a captain, I’ll be the leader of the whole crew, and I think the skills I learned in the BASTL program will help me manage everyone on the plane more effectively.’’ 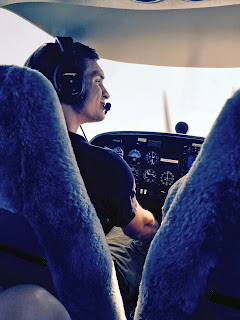 Within the next 10 months – after an additional 1,000 hours of flight time – Campbell plans to fly with a regional airline or working as a certified flight instructor. Ultimately, he wants to fly freight for a major carrier. Campbell said that without the BASTL program, it’s possible he wouldn’t have earned his bachelor’s degree yet and wouldn’t be as close to realizing his dream. “I’ve already told a lot of people at work about the program, and to anyone thinking about it, I would say do it,’’ Campbell said. “It’s a great way to expand your career options.’’

Email ThisBlogThis!Share to TwitterShare to FacebookShare to Pinterest
Labels: BASTL