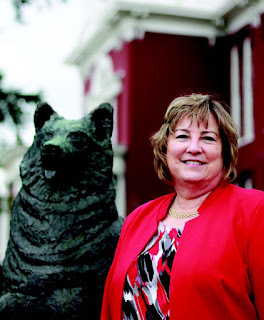 Dr. Michelle Ficca, recipient of the first Breiner Family Endowed Professorship for Nursing, announced her retirement for August 2018. The professorship was established by a gift of $1.9 million from Edward and Julianne (Miller) Breiner, who graduated from BU in 1977. The Breiners established the university’s first endowed professorship in support of an exceptional teacher, mentor and leader. While the Breiner Family Endowed Professor, Ficca’s emphasis was the development and marketing of the Doctorate of Nursing (DNP) program, which saw its first cohort of students admitted summer 2017.

Ficca joined BU in 1999 and served as assistant chairperson and graduate coordinator before becoming chairperson and professor in 2011. Earlier in her career, she taught at Lycoming College and worked in nursing and research positions at Hershey Medical Center, Pleasant Valley School District, Geisinger Medical Center and Williamsport Hospital.

Posted by Bloomsburg University COST at 6:26 AM