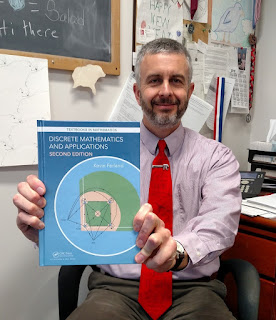 A truly committed instructor understands and embodies the classic saying: “Deeds, not words!” Several inspiring examples of that old chestnut are evident in the work of Dr. Kevin Ferland, professor in the Department of Mathematical and Digital Sciences. Kevin saw his first book, Discrete Mathematics: An Introduction to Proofs and Combinatorics, published in 2009. He began teaching the subject some ten years earlier, whereupon he discovered that he was unable to find a suitable text, i.e., one that in his words, “both covered the topics we needed and did so with sufficient support for students that may struggle with the ideas.” Consequently, Kevin decided to create a book that would offer both theory and practice and at the same time, would engage his students, rather than intimidate them. In his words:

“In 2001, I started writing the first edition of this book with a central focus upon providing quality and well-explained examples that are then well supported by many exercises that are tied directly to those examples.”

Eight years later, the aforementioned first edition of Kevin’s discrete mathematics text was born. Even so, he immediately began making substantial notes in his copy of the first edition, which were based largely upon student feedback each semester; it was these notes that formed the foundation for most if not all of the modifications which became the basis for the updated second edition, Discrete Mathematics and Applications. He suggested that

“Ever since the first edition came out in 2009, I have paid close attention to the efficacy of my approach. By improving and adding examples and exercises, I have subsequently made significant improvements that I know will benefit students even more in this second edition. What I have learned from using my textbook for eight years and receiving feedback, has been invaluable to me and I expect that users of this new edition will appreciate it as well.”

Happily, the new edition of Kevin’s book has been published recently by the prestigious Taylor & Francis publishing group. For additional substantive information about Discrete Mathematics and Applications, please refer to the following link:
https://www.routledge.com/9781498730655
--- Michael Stephans

Posted by Bloomsburg University COST at 10:43 AM